In 2016, GAISE enunciated the importance of multivariate thinking and technology when teaching introductory statistics and data science courses. A big challenge is how to do this using R and RStudio without running into cognitive overload with our students.

The mosaic package was created by Randall Pruim, Danny Kaplan, and Nicholas Horton with the goal of introducing a Less Volume, More Creativity approach to introductory statistics that could simplify the use of technology. In their 2017 RJournal paper entitled “The mosaic Package: Helping Students to ‘Think with Data’ Using R.” they write:

The mosaic package provides a simplified and systematic introduction to the core functionality related to descriptive statistics, visualization, modeling, and simulation-based inference required in first and second courses in statistics. This introduction to the package describes some of the guiding principles behind the design of the package and provides illustrative examples of several of the most important functions it implements. These can be combined to help students “think with data” using R in their early course work, starting with simple, yet powerful, declarative commands.

The package builds on the formula object in R, which allows the specification of models in a compact symbolic form. As an example, consider the drugrisk measure of drug related risk behaviors from the mosaicData::HELPmiss Health Evaluation and Linkage to Primary Care (HELP) study.

The favstats() function takes a formula as an argument to display the summary statistics for the drugrisk variable.

Alternative the df_stats() function provides a similar display (but returns a dataframe).

As Chris Wild has noted, comparisons are more interesting than descriptions of a single group. So we can modify the command to calculate the summary values by homeless status (housed or homeless). Note that favstats has taken advantage of the formula syntax in R which is given by response variable ~ explanatory variable.

If only the means are needed, they can be calculated instead.

The mosaic modeling language approach is attractive because the same syntax used above for the calculation of the mean can be used to fit a linear model (in this case, equivalent to an equal-variance t-test).

Finally, the ggformula package (automatically loaded with the mosaic package) can be used to create ggplot style side by side boxplots, again, using the same response variable ~ explanatory variable syntax. 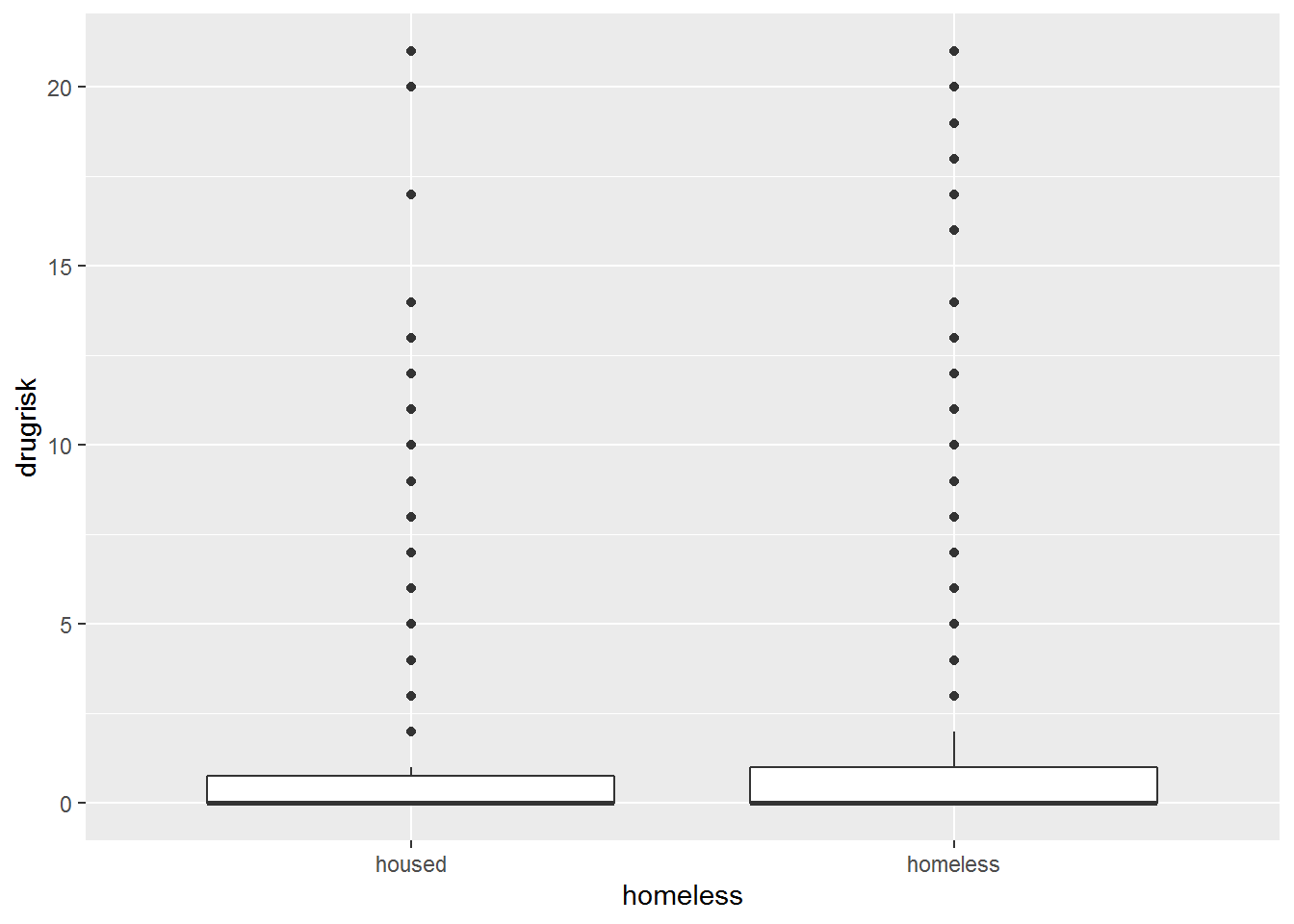 The key insight is the dramatic skew for the risk score: describing the distribution with means (as done with the lm() call) may be misleading.

What if we were also interested in a third variable? The formula interface accommodates multivariate thinking. 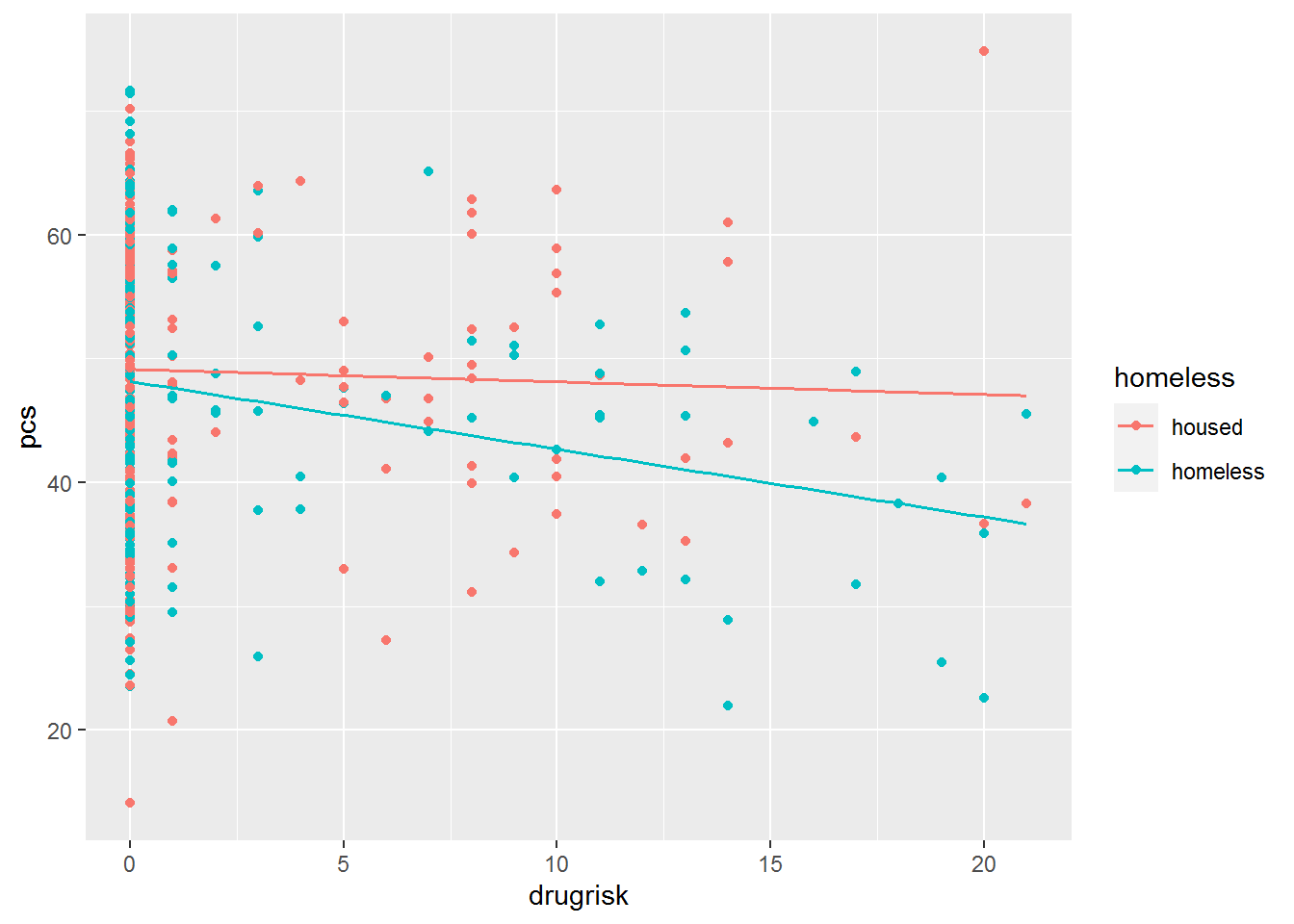 Time spent learning the formula interface is worthwhile in the long-run as it is the basis of the lm() and glm() functions. When students move into upper level courses, it’s not hard for them to move from the scaffolding of ggformula to full-blown ggplot2.

Replicating the above analyses without mosaic

It’s certainly possible to undertake the same analysis using base R or using ggplot2 for graphics. But it’s more complicated to have beginning students run commands like:

when they realize that there are missing values for the drugrisk variable.

The dplyr functions group_by() and summarize() can be used, but some people find the suite of tidyverse functions too challenging for a first course in statistics:

It’s also not a huge stretch to get students to use ggplot2 to generate the boxplots comparing homeless and drugrisk.

However, all of the alternative approaches require new idioms and learning outcomes. They add complexity. The mosaic authors argue that teaching just one approach to modeling can help reduce the cognitive load of the course and allow the instructor to focus on getting students to explore data.

Each day during the summer of 2019 we intend to add a new entry to this blog on a given topic of interest to educators teaching data science and statistics courses. Each entry is intended to provide a short overview of why it is interesting and how it can be applied to teaching. We anticipate that these introductory pieces can be digested daily in 20 or 30 minute chunks that will leave you in a position to decide whether to explore more or integrate the material into your own classes. By following along for the summer, we hope that you will develop a clearer sense for the fast moving landscape of data science. Sign up for emails at https://groups.google.com/forum/#!forum/teach-data-science (you must be logged into Google to sign up).

We always welcome comments on entries and suggestions for new ones.